Best Google Fonts are popular among website designers across the world. With more than 900 fonts, you can freely access them on your website. People prefer to use Google fonts because there are some benefits.

There is free access to thousands of fonts which gives you the freedom to choose professional and quality typefaces. However, these fonts were costlier a few years ago. To increase the performance and make your site look good, Google Fonts are the best option.

The excellent part of google fonts is that most of the browsers support it. The names of those browsers which support the best Google Fonts are Google Chrome, Apple Safari, Internet Explorer, Mozilla Firefox, and Opera.

When anyone talks about the best free Google Fonts, the two essential terms are always used, like Serif & Sans Serif. The whole world of Google Fonts gets divided into these two main fonts. The details are mentioned below.

Serif textual styles are based on highlighted serifs; small strokes joined to the last limit of the main piece of the letter or symbol. Serifs have their origin in letters found in Roman stone carvings and were considered to be connected with how words were painted into stone before they were carved. Serif typefaces are at times called ‘roman’ for this reason. Examples of serif text styles are Garamond and Times New Roman.

Which are the best Google Fonts for Free?

Google’s Roboto is the most downloaded text style. It is considered one of the best Google Fonts. Roboto is under the class of Neo-grotesque and belongs to the sans-serif group. Cristian Robertson was the designer of this typeface which was released in 2011. Roboto is easy to recognize, spotless, beautiful, and at the same time amicable and readable.

Lato is a sans serif family typeface of google font. Warsaw-based designer Łukasz Dziedzic started this font in 2010. It was basically designed for corporate works only but later it was released as a typeface. Lato is one of the most used Google fonts. It is one of the best free google fonts. From hairline to ultrabold, there are 10 styles available. 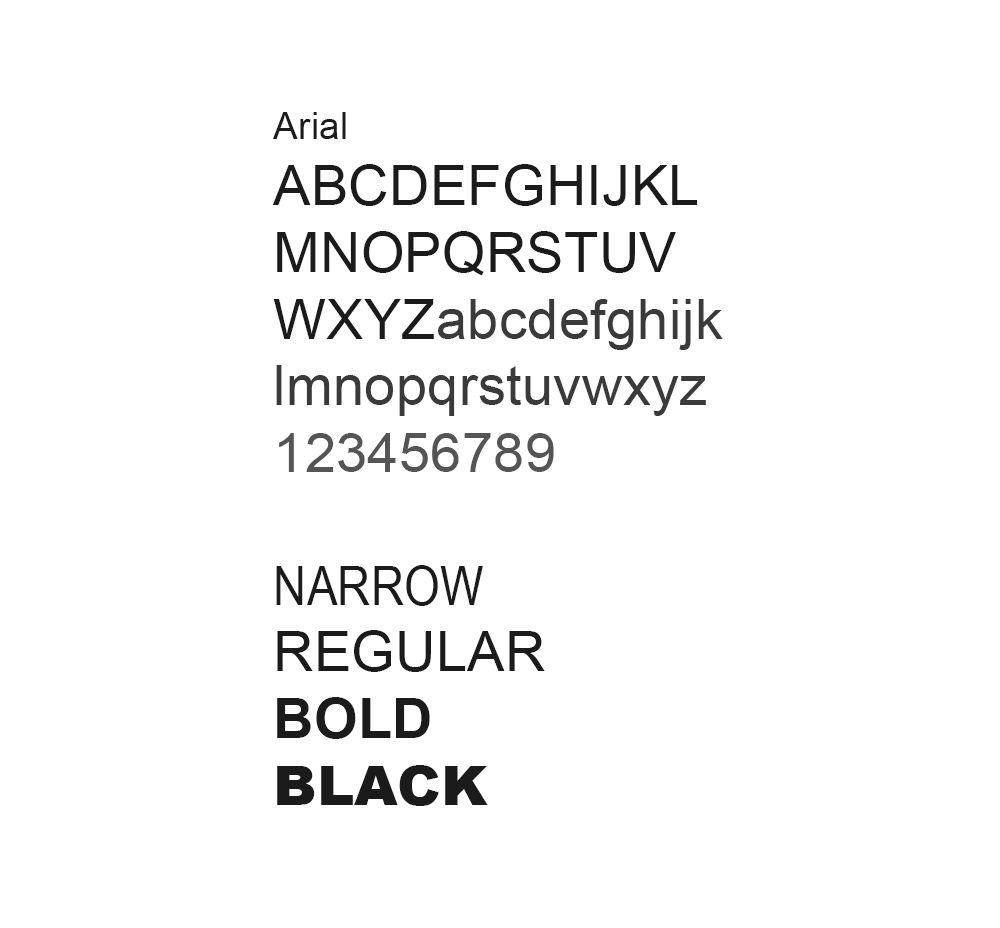 Arial typeface is usually used in the first stages of writing. It consists of many text styles. This big typeface family is included in sans serif style. It is easy to use and read textual style, so the use is maximum in corporate and education. 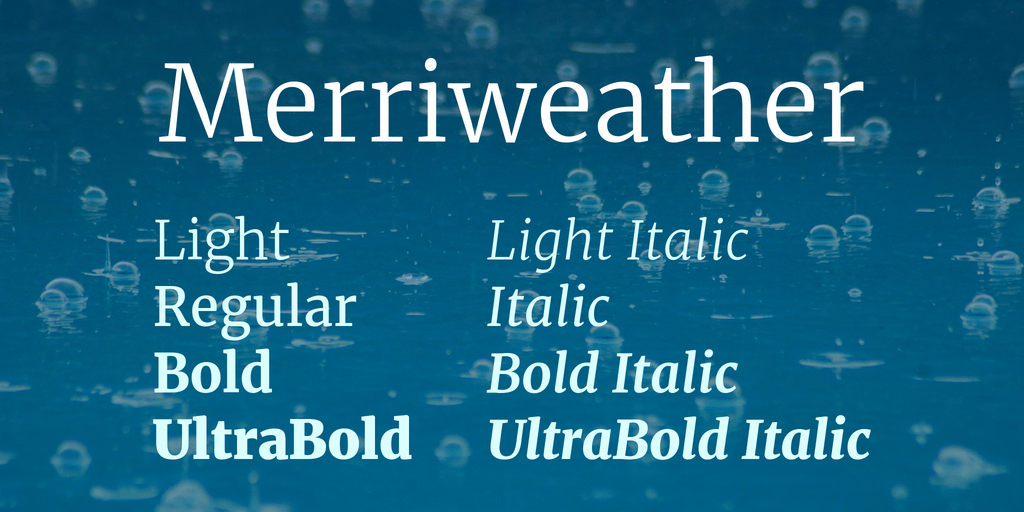 Eben Sorkin’s Merriweather is designed to read on screens like mobiles and computers easily. Merriweather is appropriate for use in long texts of features and titles. Merriweather has 8 styles: Light, Regular, Bold, Black, Light Italic, Italic, Bold Italic, Black Italic. 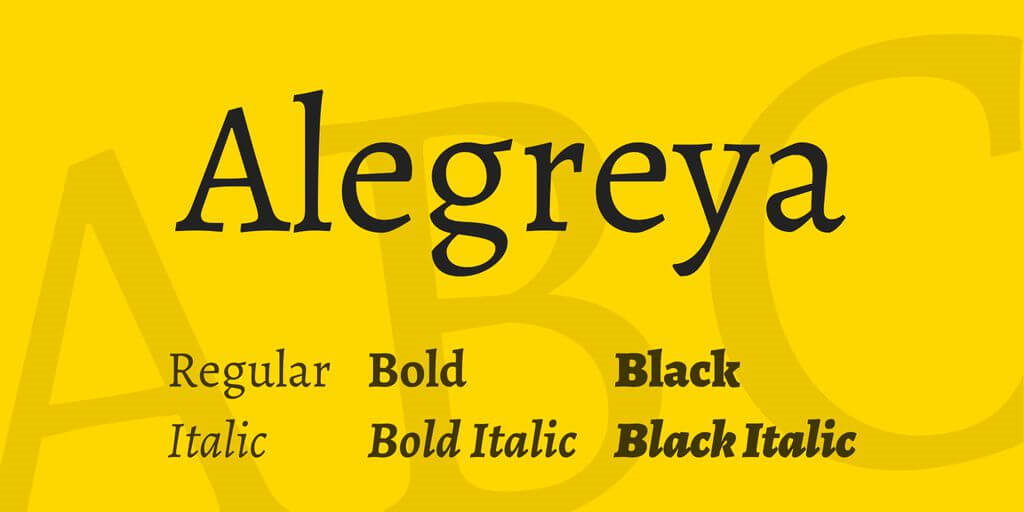 Alegreya is a textual style designed for literature purposes. It not only provides good performance but also displays a strong and harmonious text. Its textual crowning style helps to read the long text with a clear and fresh motive. Alegreya conveys a dynamic and varied rhythm.

Montserrat is a sans serif font designed by Julieta Ulanovsky in 2011. This kind of font came into existence to rescue the city’s topographical beauty which emerged in the first half of the 20th century. This typeface has a modern classic touch in textual styles. 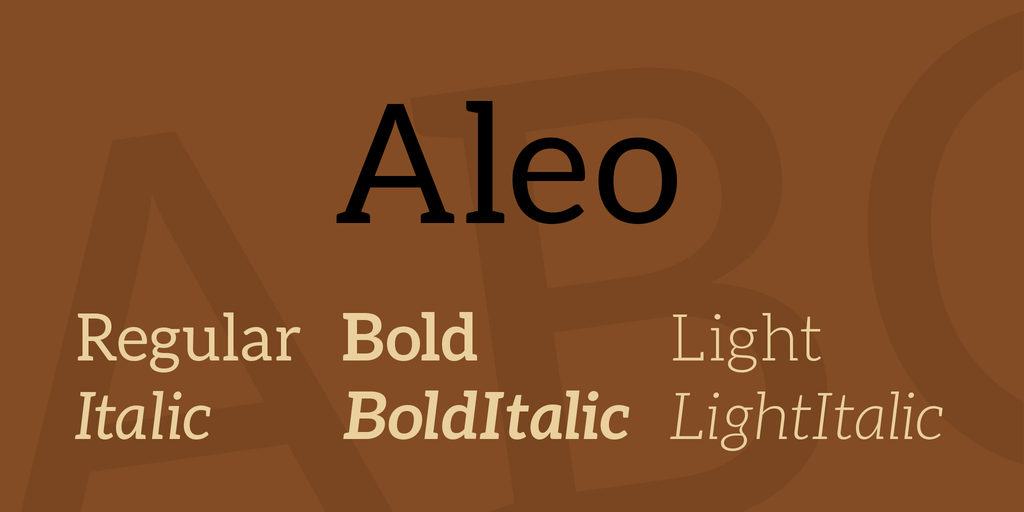 A well-balanced and modern serif typeface is Aleo which gives users a modern experience. It is a suitable typeface for long texts with semi-rounded curves. Alessio Laiso designed Aleo. It is a contemporary textual style associated with Lato.

This particular typeface comes from a large family of Abril which includes more than 16 textual styles. The inspiration for Abril Fatface comes from the time of 19th century British and French posters. This is a serif font with clean bends that gives the typeface a touch that helps any text add a rich appearance. 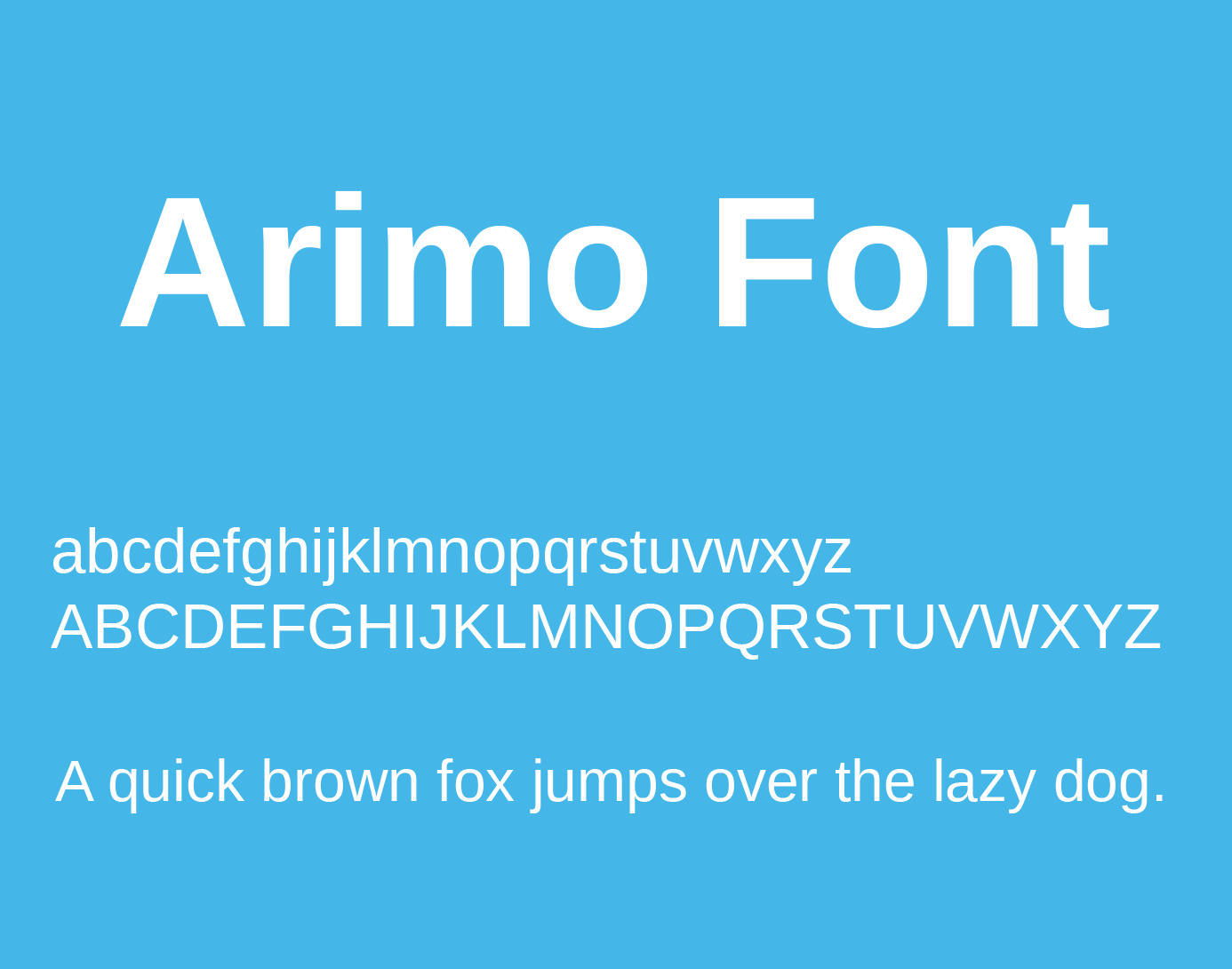 Arimo is a sans serif font type that is metrically compatible with Arial. Steve Matteson designed it. Arimo typeface enhances screen readability attributes and settles the requirements of a web designer searching for width-viable textual styles. 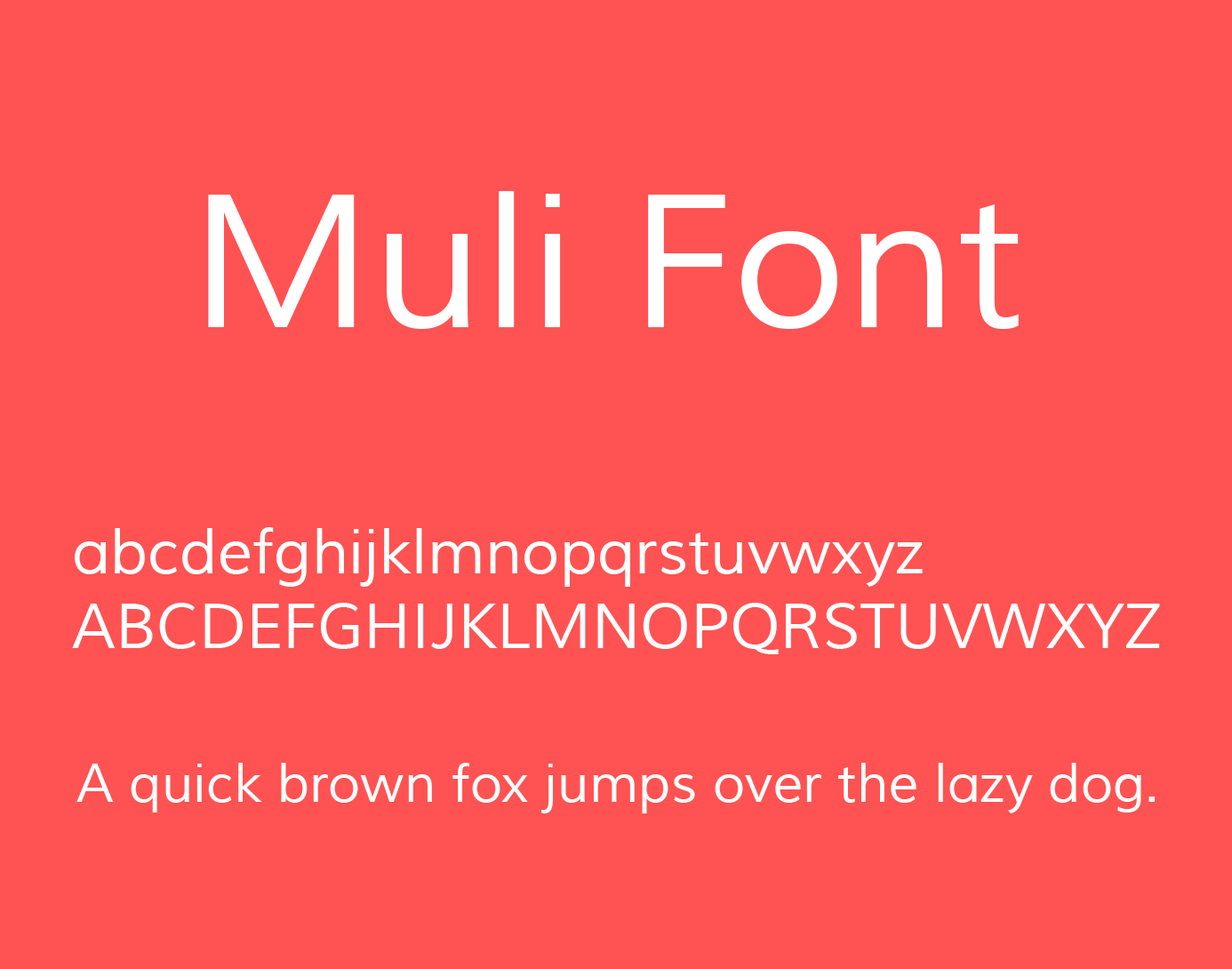 Vernon Adams designed muli. Muli is a sans serif typeface built for display text topography. The primary use of this typeface is for display font but can be used as a text font. Muli is suitable for desktops, laptops, and mobile devices. 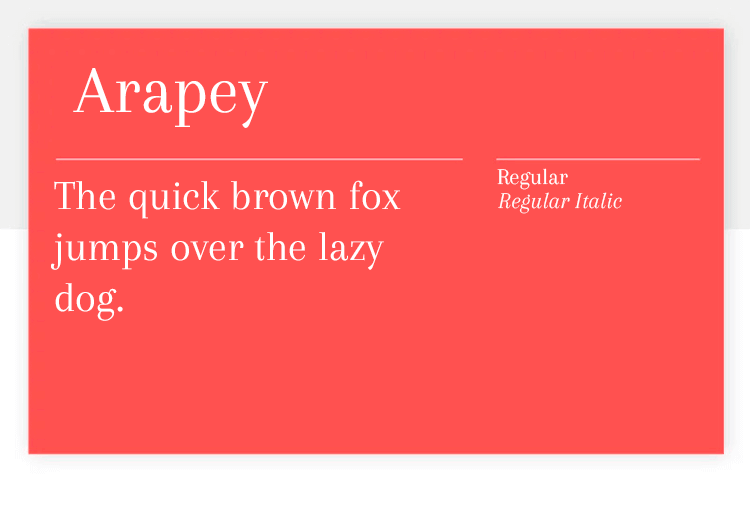 Arapey is a contemporary modern typeface and offers a beautiful but limited style among the various google fonts. The typeface has a unique structure, which at the same time offers gentle lines that increase featured content. Web designers love this text style for its italic style, glamourous, and adds a specific marvelousness to the texts. 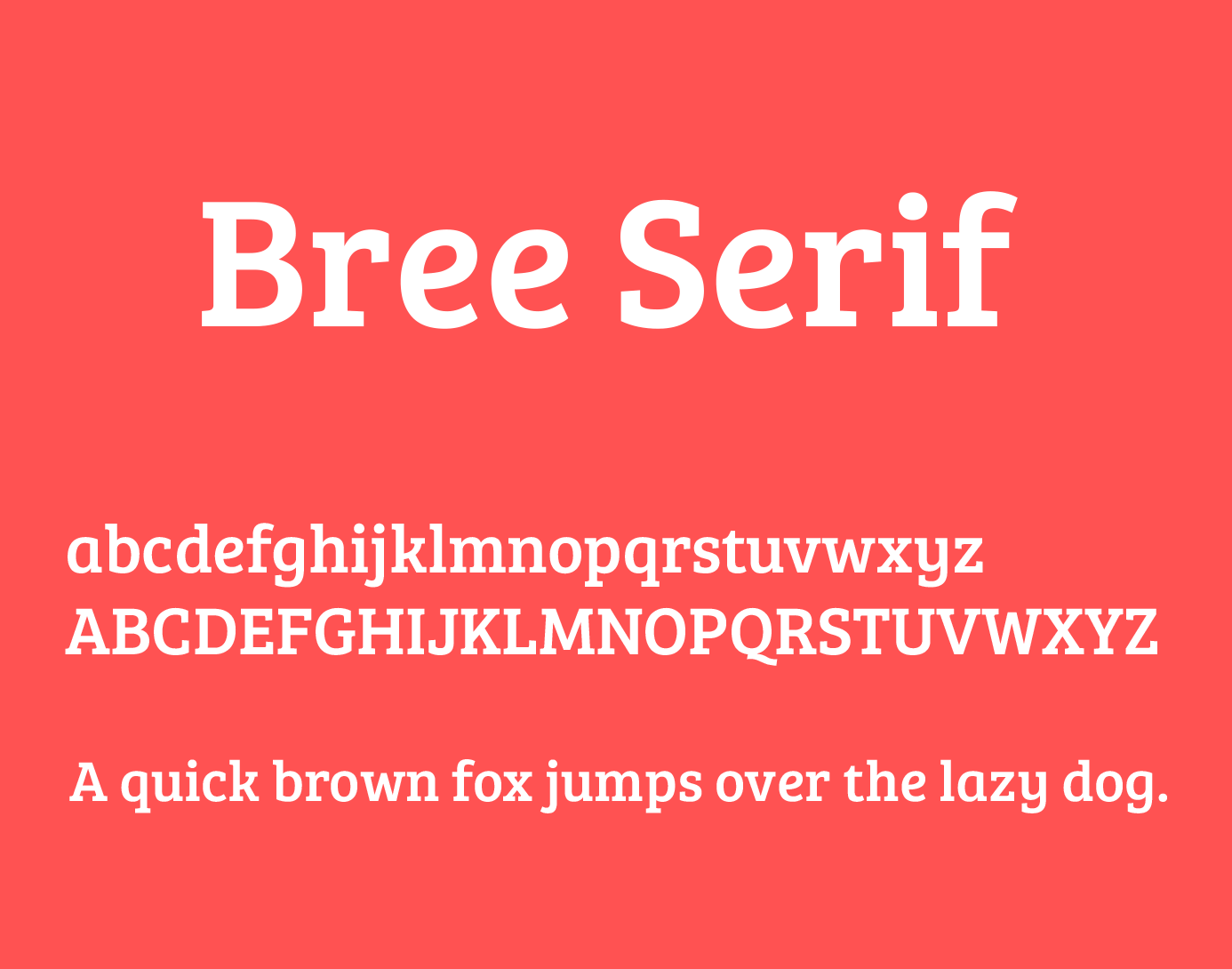 The Google Font Bree Serif is a serif font from a big award-winning family Bree. According to many designers, it is one of the best Google fonts. Bree Serif was designed by two main creators Veronika Burian and José Scaglione. It is famous for its likable effects. This style came into existence in 2008. 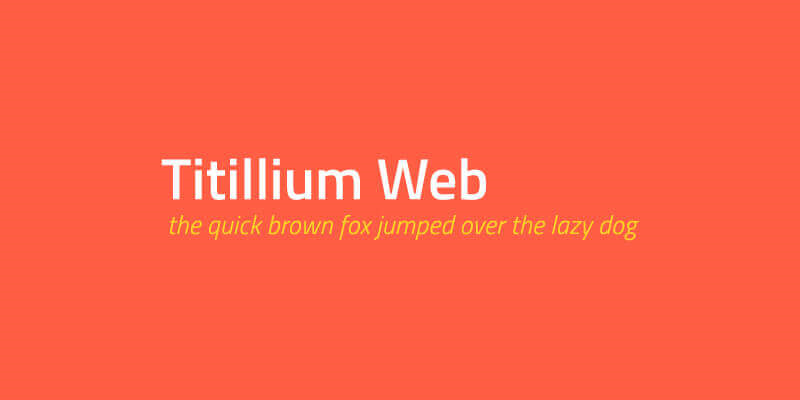 Titillium Web is no doubt one of the best google fonts available on the internet. Every year many students work on this font to develop and solve problems. The designer of this typeface was Accademia di Belle Arti di Urbino school. Till now, it is an evolving font. The best part of this font is that the outcome is not yet delivered because many designers are interestingly amending and revising this font.

This typeface, Concert one, is inspired by 19th century 3D lettering. It was developed by two persons Johan Kallas and Mihkel Virkus. The textual styles are in rounded grotesque typefaces. It is a very basic sans-serif typeface. 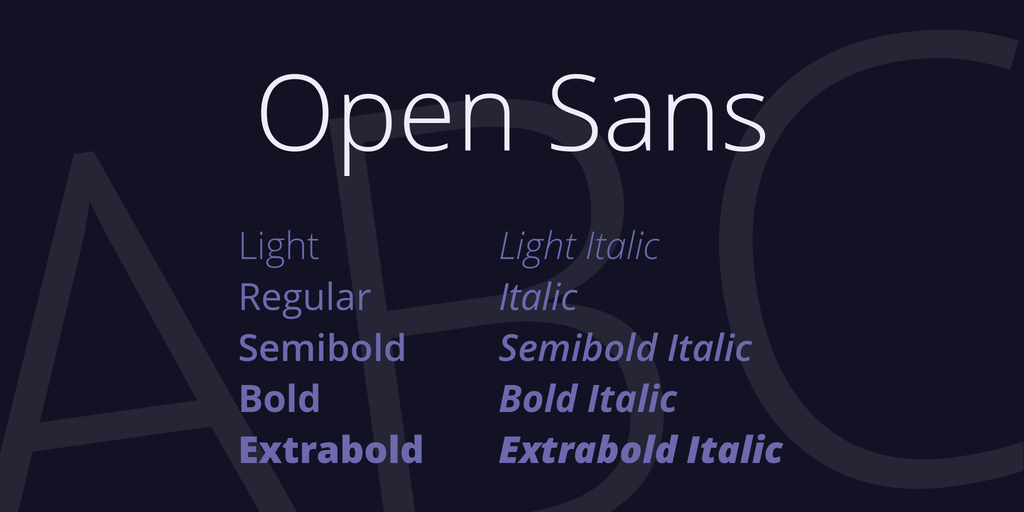 This typeface, Concert One, is inspired by 19th century 3D lettering. It was developed by two persons Johan Kallas and Mihkel Virkus. The textual styles are in rounded grotesque typefaces. It is a very basic sans-serif typeface. 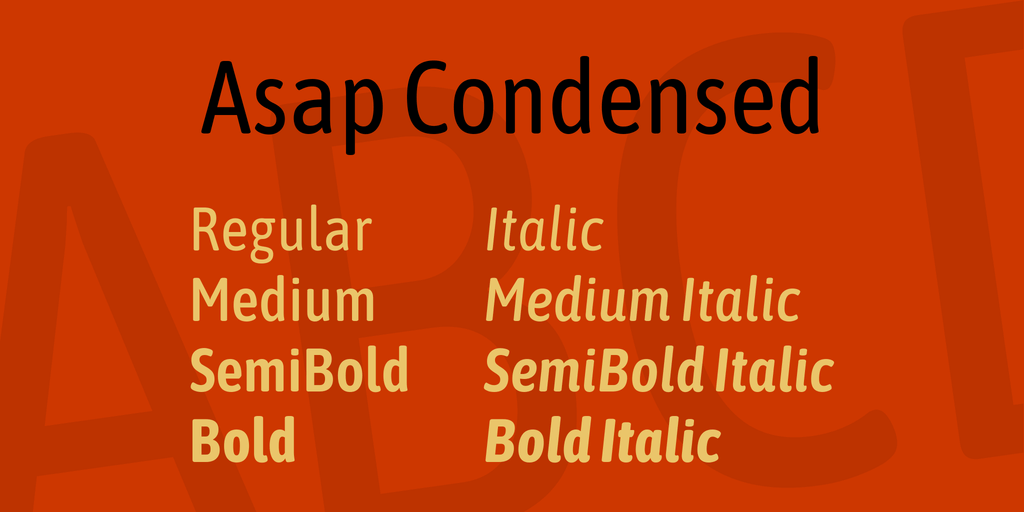 ASAP Condensed is the dense adaptation of the Asap family. It’s under the sans-serif family with rounded corners. It was planned by Pablo Cosgaya and Nicolás Silva. This particular font, uniquely created for mobiles and computers use. ASAP condensed is a simple-looking text style. This typeface permits clients to change type styles in a hurry without reflowing a text. 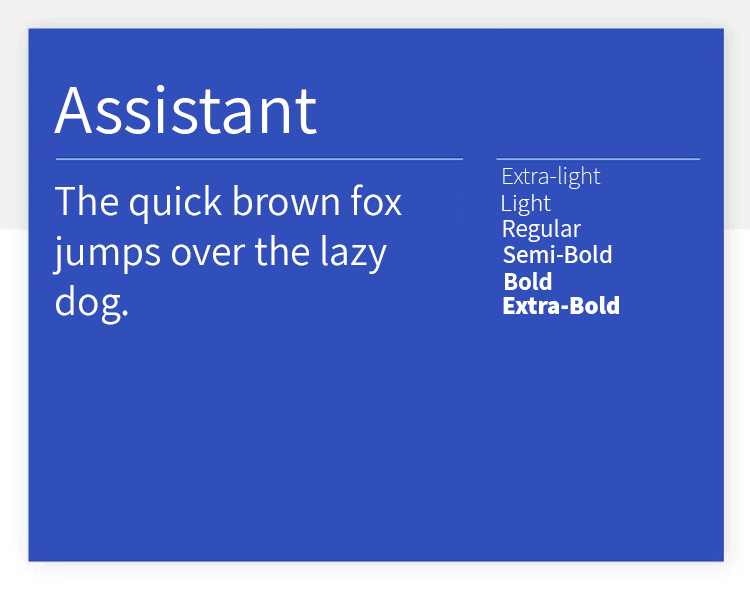 Assistant is another one of the best Google fonts. Assistant is a perfect typeface and offers 6 liberal styles, from additional light to strong bold. It is a text style with extraordinary clarity. 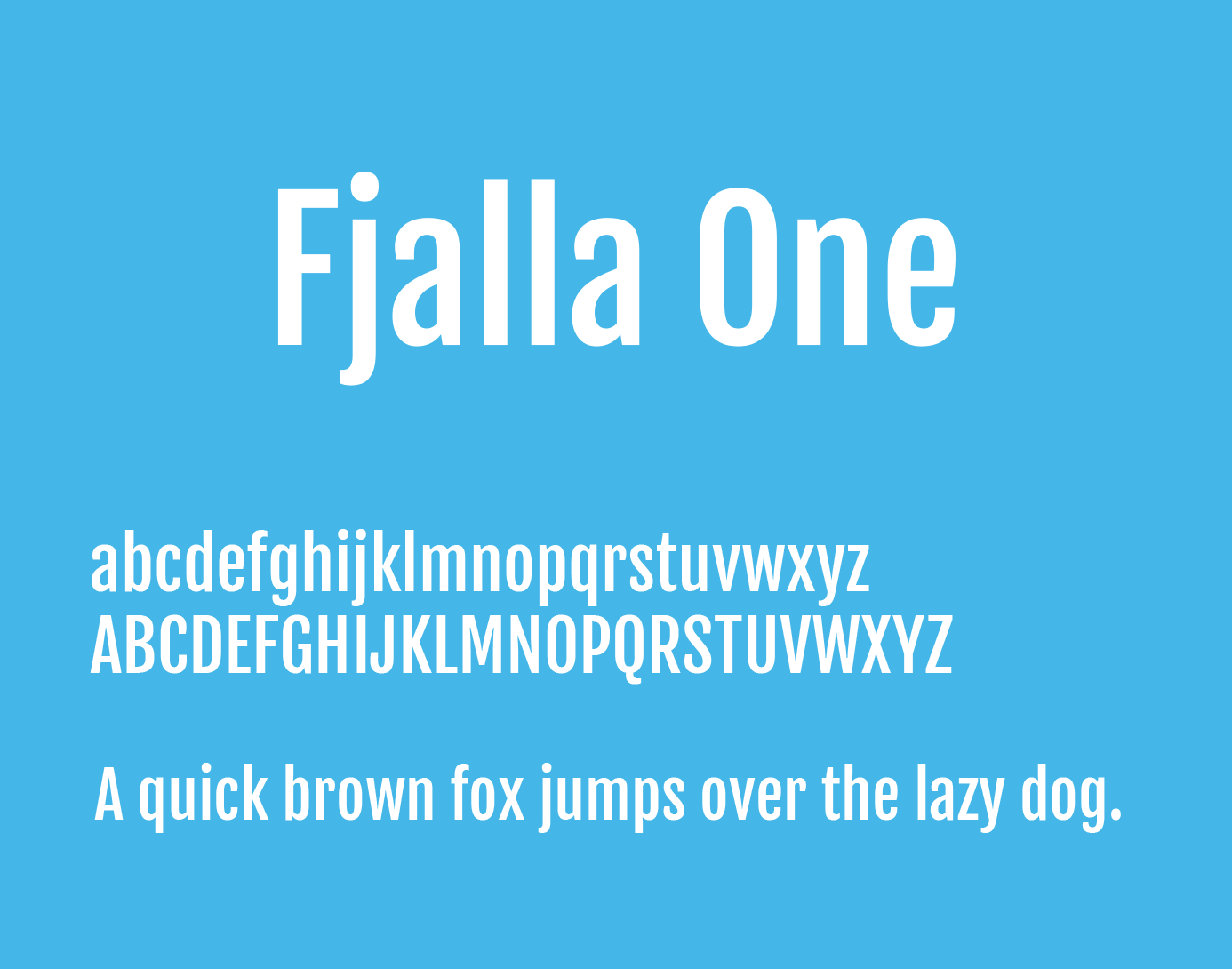 Fjalla One is a sans serif typeface with a medium contrast display. It has been gently adjusted to the restrictions of the screen. In spite of display characteristics, Fjalla One can be used in a wide range of sizes. 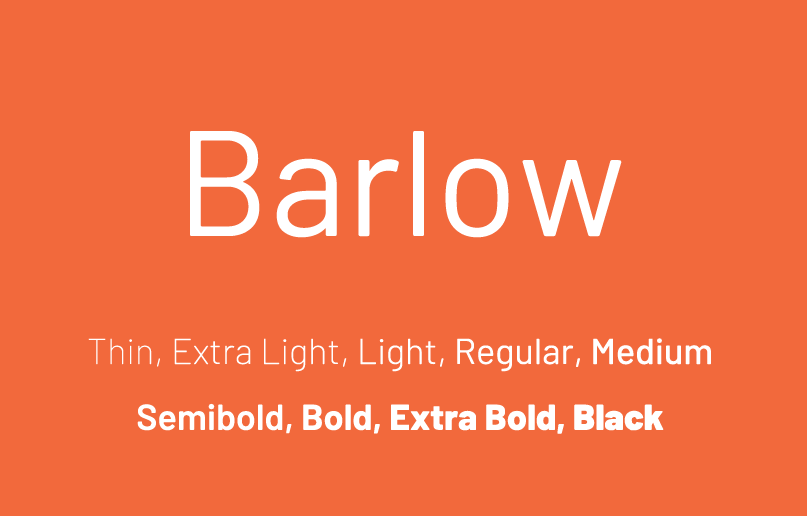 Jeremy Tribby is the designer of the Barlow typeface. Barlow is a little rounded and belongs to the Grotesk-type family. This typeface text style shares qualities with highway, buses, and trains signs. It has excellent clarity, with nine unique styles to browse on the internet. 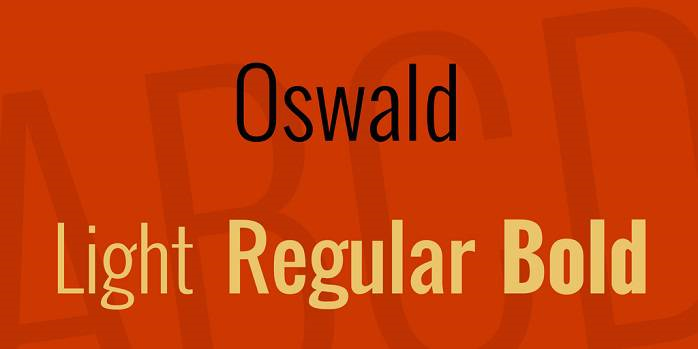 Oswald is an alternate gothic sans serif typeface. Vernon Adam was the designer of one of the best google fonts named Oswald. Oswald’s textual style is intended for advanced users on PCs and cell phones. Designers use it for pretty titles and quotas that need to be attractive. 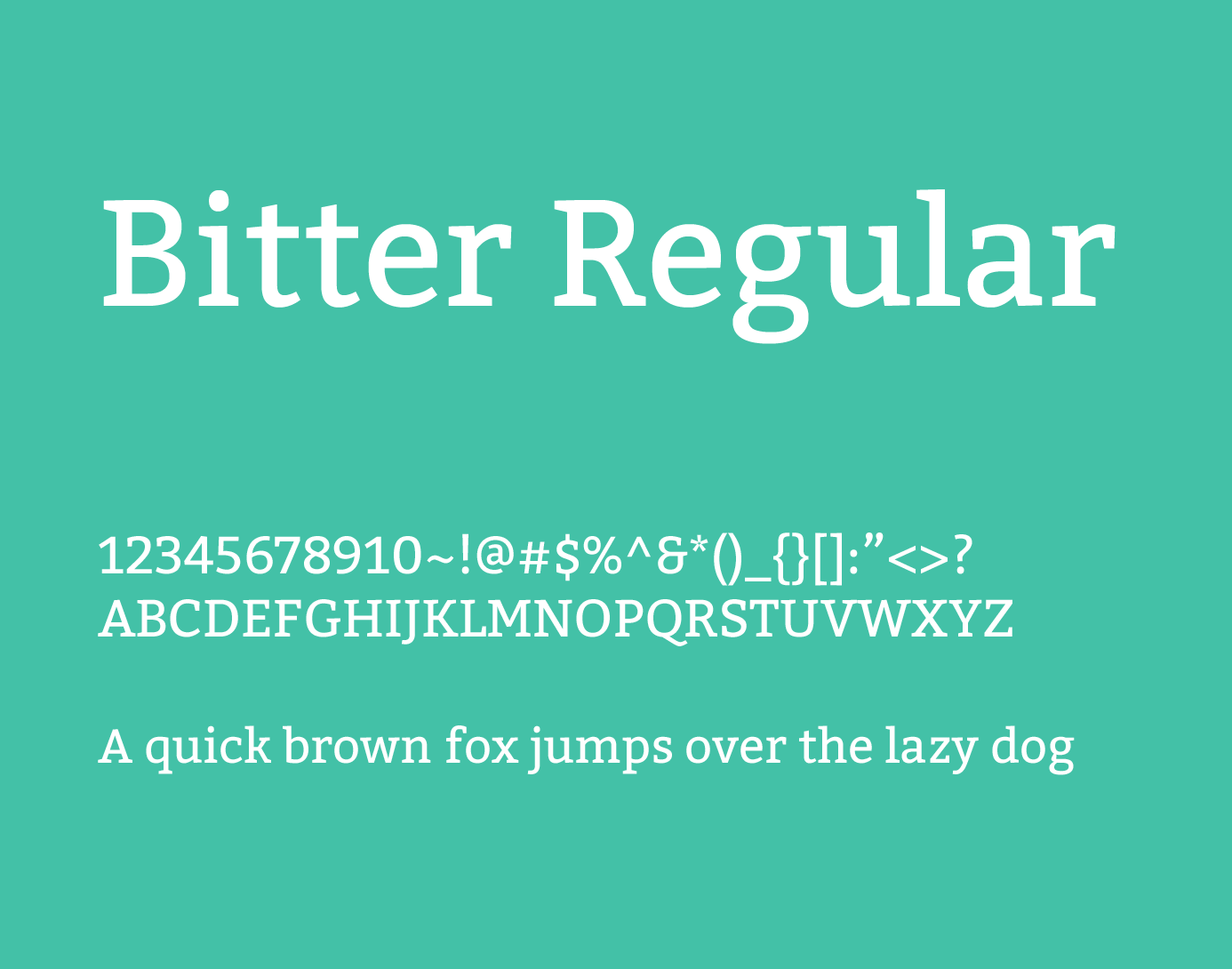 Bitter is one of the best google fonts because of its incredible flowing and long text appearance. The creator, Sol Matas, has presented to us this tremendous textual style. It is said that the motivation behind this textual style was a modest and powerful pixel. From that point, Bitter advanced into a flexible apparatus with styles that reach from extra light 200 to 900 intense bold.

Poppins is the geometric sans serif typeface in the world’s stage for its popular design tools. It is one of the newcomers. Poppins is the first-ever typeface that includes Devanagari text with a range of weights in this genre. It originated in India with help from the Devanagari and Latin composing frameworks. 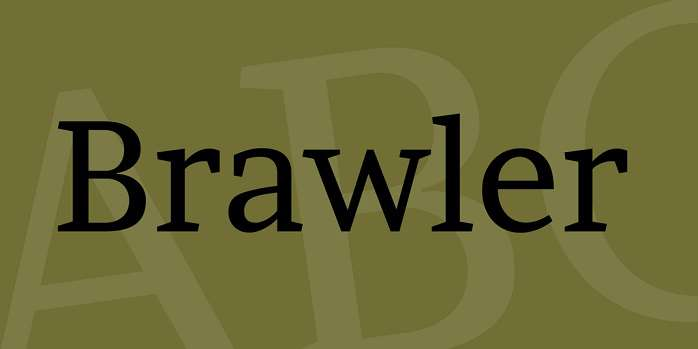 Brawler is a typeface with sharp characters and a tough feature, planned for comfortable reading in small sizes. It came into use first as a typeface for papers and tabloids. The basic idea of Brawler came from the demand for low-quality printing media and periodical publications.

Google Fonts are an unimaginably fantastic and flexible asset for your site. It gives you more than 1017 textual styles; Google Fonts can make your site look better while increasing its presentation and speed on the web.

Top 5 Fonts that all web designers should know

1) What is the best font in Google?

2) What is the prettiest font on Google Docs?

Some of the prettiest Google Fonts are –
a) Lato
b) Open Sans
c) Roboto
d) Merriweather, etc.

Yes, the Best Google Fonts mentioned above are free.

4) How to use Goggle Fonts?

You can log on to Google Fonts. On the left side, use the filters to choose the best Google font suited for your purpose.

6) Which are the best Google Fonts for Website Design for Free?

All these fonts mentioned here are the best Google Fonts. These are the perfect choice for web designers.

Every Update in Inbox

9 Tips to Extend Android Battery Life You Must Try

5 Sites Where You Can Download Old PC Games for Free